Start a Wiki
watch 01:41
Who is Alex Dunphy?
Do you like this video?

S1 - S2 - S3 - S4 - S5 - S6
Alexandria Anastasia "Alex" Dunphy is the second daughter of Claire and Phil Dunphy. She is evidently the most clever and intelligent of the three siblings. Also the middle child to a shallow big sister and a goofy younger brother, she enjoys messing with them when they are rude to her, which is fairly often, taking advantage of their naivety and inferior intellect by fooling them into believing unrealistic things. At one time she had convinced Haley and Luke that they could charge electronics by rubbing the battery on her head and holding it in his mouth. As much as she enjoys torturing her brother and sister, she always seems to have their backs, as in "Undeck the Halls" when she confesses to smoking, even though she didn't do anything, to bring back Christmas for them or in "Games People Play", when Alex says she would have tutored Luke if she had known he was failing Pre-Algebra.

Alex is very intelligent. She greatly enjoys messing with both her older sister and younger brother. Alex is generally shown as being an outside observer to the antics that surround her while she quietly does her own thing. As much as she enjoys torturing her brother and sister, she is shown to love them both. According to Haley, she has no fashion sense. And judging by the constant remarks from her sister, Alex is shown as being very socially awkward, with difficulty in making friends and in being able to find a boy who likes her personality. It is shown in several occasions, though, that she does indeed care for her reputation, like when she refuses to let herself be seen with her mother dropping her off to meetings with her girl friends, and when she accepts advice from Haley about how to treat a friend and climb into popularity, and when she asks Haley to let her sit at her table at the cafeteria. She did go to her prom with a classmate who everyone likes, but he is gay.

She, as a stereotypical precocious kid, displays a sense of superiority because of her erudition, constantly putting her accomplishments on display and demanding recognition for them. An overachiever, she plays the cello and practices lacrosse; she chose to play the cello because she would have a better chance at being in a university orchestra than if she played the violin, as cellos are more in demand, although she does not actually enjoy playing the cello and eventually hated it, saying that she only continued doing so because she does not want to start quitting anything as she never had in her life.

It has been established recently in "Tableau Vivant" that Alex is a light sleeper, as she was surprisingly energetic when staying awake nearly a whole night thinking about her upcoming art project. In the episode "Planes, Trains and Cars", it appears Alex is bilingual, as she told Haley "Time to get a new boyfriend" in what appeared to have been Chinese.

Haley is Alex's older sister, she also happens to be her polar opposite. While Alex is smart, quick witted and geeky, Haley is popular, outgoing and shallow. At the beginning of the series Haley and Alex had a much more strained relationship with Alex always trying to stand apart from her sister and Haley constantly mocking Alex on her life choices, such as clothing, homework, boys and Alex would return the mocking. As years have progressed the two girls have grown closer. Though they still mock and tease each other, it is in a more playful way and you know that they love and care about each other.

Mitchell is Alex's uncle. They don't spend much time together, but there are some episodes in which they are seen interacting.

In "The Kiss", Claire finds out that Alex has been texting with a boy. She sends Haley to give Alex advice about love, however, Haley says that if she doesn't kiss him soon, he will think she's a lesbian, so she rushes to Jeremy's house and rambles on about their feelings and wanting to kiss him. Jeremy is left stunned and, before he is able to reply, the door to their house opens and it is revealed that his friends have just overheard their conversation. Alex runs off in embarrassment. The news quickly spreads, humiliating both Alex and Haley.That night after Claire comforts Alex, Jeremy appears by their house, waiting for Alex. He tells her that if his friends weren't there, he would have said yes to his offer of a kiss. When he asks her if she still wants to, she tells him that she wants to hang out with him in person more first instead of just over text, to which Jeremy sighs with relief.

In "Bixby's Back", Alex states that she will be having a phone date with Jeremy for Valentine's Day. 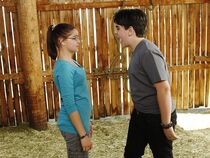 In "Dude Ranch", Alex meets Jimmy while on vacation with her family in Wyoming. He first flirts with Alex, which makes her to feel annoyed. Jimmy argues with Alex that she shouldn't be fighting what they had together and Alex states that she just wants to be left alone. Jimmy kisses her and obliges to Alex wishes and leaves. Later, Alex confronts Jimmy and tells him that he "stole" her first kiss. He says that he doesn't want it and he precedes to give it back by kissing her again. She says that she doesn't want it now and "gives it back to him" by kissing him passionately before she leaves confused at what she has done. They end up falling in love, but decide to not keep a relationship due to the distance between their homes.

In "Baby on Board", there is a prom at Alex's high school. After saying it was lame, she does get asked by a boy named Michael.

In "Yard Sale", he comes over. Claire is certain he's gay, and Mitchell and Cameron confirm her assumption. They convince Alex to ask him. This isn't met well, as Michael gets very defensive and upset. Later, however, they are seen being intimate again, so maybe they didn't break up definitely.

Retrieved from "https://modernfamily.fandom.com/wiki/Alex_Dunphy?oldid=23635"
Community content is available under CC-BY-SA unless otherwise noted.