S1 - S2 - S3 - S4 - S5 - S6
Gavin Sinclair is Haley's obnoxious boss at her job as an assistant. It is mentioned that he has been profiled by Vanity Fair for pioneering a new sock length.

He first appears in "Queer Eyes, Full Hearts" where he is shown to treat his employees with disrespect and rudeness. After Haley forces him to giver her the interview he promised, he asks her the 5 things that are wrong with his assistant Nikki's outfit. Haley answers well and confidently which impresses Gavin so he decides to hire her.

Gavin reappears in "Integrity" where Haley mentions that he wants her to pick up some orchid which stops her from going shopping with Gloria and Haley introduces Gloria to Gavin since she Gloria decided to help Haley stand up for herself at work and Gloria is so disgusted by Gavin's behaviour that she wanted to kill him. Later, Gavin makes Haley and Gloria move their car so he can park his and calls her phone to say "Faster.". Much later, he heard Haley calling him a jackass then throws her out and again calling her phone to say "Faster." and later when he hears the door open, he says "What do you want?", thinking it's Haley, but when he sees it's Gloria, he becomes frightened. Gloria told him to listen to her voice and look into her eyes and ask himself "Did this woman made it all the way here from Colombia without knowing some very bad men who would love to do her a favor?", making him apologize to Haley and it seems that he wants Haley to go spread seeds on his front lawn so he can run through birds when he gets home. It's likely and obvious that after this, Gavin may have developed a fear of Gloria. 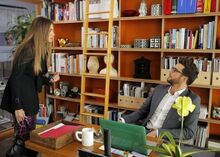 Retrieved from "https://modernfamily.fandom.com/wiki/Gavin_Sinclair?oldid=36759"
Community content is available under CC-BY-SA unless otherwise noted.