Luke was born in California, USA on November 28, 1999 and was conceived by Phil Dunphy and Claire Pritchett as their third and youngest child.

Luke is a rambunctious, playful, mischievous, and immature teenage boy who is often doing his own thing. He is also known for being a boy with low intelligence, which has supposedly inherited from his father, who is not so many smart either. This makes him to be very innocent and not always understand the repercussions of his actions, which is clearly shown in "Coal Digger", when he announces at a family gathering that his mother thought Gloria was a "Coal Digger". He is also thought to be a bit vacuous, because of many questionable actions, such as getting his head stuck in the banister and jumping on the trampoline wearing only underwear and a box on his head. Like his father, he is believed to have ADHD, as he repeatedly becomes distracted when he has to do something important. He is easily annoyed when people show intelligence: Whenever Manny says something with long words, he says 'Your making it lame again!'. 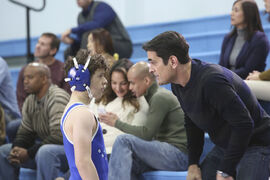 Luke has a special relationship with his father. They have more a friendly relationship than a family one, as Phil is mostly calling his son "buddy". They almost have the same likes and dislikes and are most of the time seen doing something together, such as playing video games, watching TV, living adventures, do sports, and others. However, they don't have exactly the same likes/dislikes, as in some episodes it has been shown that they share different ones:

In "Fizbo", it is revealed that Phil is afraid of clowns, while Luke likes them.

In "The Butler's Escape", Luke wants to quit magic but Phil can't accept it because Phil loves magic.

In "And One to Grow On", Phil wants to set Luke on a dance class, which he dislikes, because Phil says that he comes from a long line of dancing Dunphys.

Luke loves a lot his father and viceversa, as in many episodes it has been shown his family love towards him:

In "Phil on Wire", even though Phil is afraid of walking across a tight rope, Luke encourages him and he finally does it.

In "The Old Man & the Tree", when Phil attempts to meet his goal of traveling the length of home to Canada on a stair master, Luke first thinks that it's not a good idea, but later, he encourages his father to do it. 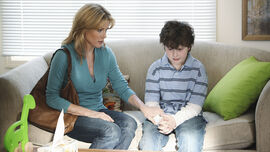 Unlike with Phil, Luke has a more familial relationship with his mother. He usually asks her help for something important, mostly for a school problem: homework, exams, projects, etc. While with Phil, for something about girls or for have fun with him. Also, when Luke does anything that makes Claire upset she gets mad at him, while Phil tries to bond with him and to not get mad at him. Despite this, Luke has demonstrated that he loves his mother in some episodes:

In "Manny Get Your Gun", when Claire thinks that Luke prefers his father before her, as he wanted to go with Phil to the restaurant for Manny's birthday instead of her, Luke reassures Claire that she is actually fun to make her feel better.

In "Snip", Luke first gets mad at Claire for embarrassing him at school, but later he realizes that he has been hard on her and gives her a rose to apologize. 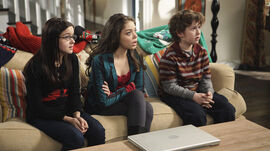 In "Me? Jealous?", while Haley and Alex are fighting, Luke interferes to make them stop and tells them that they are both bad big sisters to him. Luke's words make Alex and Haley to remember their old habits when they were younger and they were dressing up Luke, something that Luke is not happy about.

In "Baby on Board", Luke reluctantly gives Haley her college acceptance letter and realizes that Luke was hiding it because he's gonna miss her (although Luke denied it). And sure enough, in "Schooled", when Haley is going to college, Luke is so sad about it and to tell her goodbye he puts on a mask for not seeing that he is crying, demonstrating that he really loves his sister. 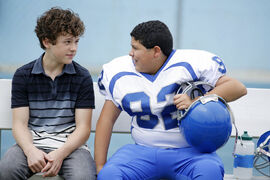 Manny is Luke's step-uncle. They seem to be good friends and get along quite well, although Luke is often annoyed by Manny's opinions, as he is so much more mature than Luke. However, Luke appears to be more popular at school than him, and usually helps him to be more popular or score with a girl.

"Coal Digger" marks the first interaction between the two, when they get into a fight at school, because Manny refers to Luke as "his nephew" which he dislikes.

In "Virgin Territory", Luke helps him with a girl named Miranda by taking Cam's car and driving it down the block of her house to impress her.

In "Mistery Date", Luke helps Manny to find a girl Manny likes, attending the 3 bar mitzvahs where she is.

In "A Hard Jay's Night", Luke goes to a party against Manny's advices. Manny follows him and when they reach the door, the party host recognizes Manny but not Luke, revealing that Manny had been invited to the party making Luke feel rejected and dejected, as he always thought that he is the cool one and Manny the awkward one. But Manny comforts him saying that if wants to keep being cool, he has to change his style like him.

Luke was often seen to be jelous of all the attention Lily received for being the 'cute' one in the family insted of him. He and Manny used cookies that Claire made to try and lure Lily into a trap so she would spill the milk and get in trouble but Cam ended up being tricked. He liked to insult Lily for example he told Mitchel that Lily had no emotinn in her eyes.

However, after Joe was born, Lily became worried that he was the cute one and she was being replaced and Luke told her that they 'would talk'.

In "New Year's Eve", Luke invites Becca along with her cousin Joyce to the Dunphy house. Luke plans to make out with her in his room, but Haley and Alex try to interrupt them several times until they just go in with laundry and Haley tells Becca to leave, threatening to call her parents.

Simone is a girl that Luke has a date with in "Best Men".

Carly is a girl that Luke has a crush on in "Suddenly, Last Summer".

In "A Fair to Remember", Luke has a crush on Sienna, a girl from his school who is also a good friend of Alex's.

In "Spring-a-Ding-Fling", Luke has a date with Rhonda for the spring dance in his High School. Claire wants to help him to score with her, so she helps Rhonda to dress more like a girl and be beautiful, as she always wears very dirty and manly clothes. Luke is not really happy with that because he preferred her the way she was and asks Claire to "fix" her. However, the two are later seen dancing together, so he may really like the new Rhonda.

Tammy is the daughter of Ronnie and Amber LaFontaine, the Dunphy's next-door neighbors.

In "The Big Guns", Luke develops a crush on Tammy, watching her sunbathe on her parents boat, from his bedroom window. He tries to talk to her, while she blows him off and insults him. Alex gives Luke advice to just ignore Tammy when they see each other, which he does — which in turn bothers Tammy enough that she wants him to come back and talk to her.

Luke was first not so much interested about having girlfriend or seen pornography. However, as the series has progressed and he has grown up, he has shown an interest about it in many times.

In "Not in My House", when Claire discovers a photo on her computer of a topless woman on a tractor, she assumes that Luke downloaded it since is the one who used last her computer. But Luke tells her that he did not download the photo because he thinks it's gross, as he is only a child.

In "Baby on Board", when he realizes that Haley wants to live with Dylan, Luke asks her if she is doing sex with him, and Claire tapes his mouth immediately.

In "New Year's Eve", he has a date with a girl, Becca, and he tries to make out with her in his room, although his sisters finally tell her to leave, threatening to call her parents.

In "Under Pressure", he and Manny go on a double date with twins, Zoe and Piper. At the end the date, the twins ask Luke and Manny if they want to back to there house and make out and they accept their offer.

In "Australia", during their family trip to Australia, he and Manny go to a nudist beach to see topless women.

Retrieved from "https://modernfamily.fandom.com/wiki/Luke_Dunphy?oldid=25118"
Community content is available under CC-BY-SA unless otherwise noted.