S1 - S2 - S3 - S4 - S5 - S6
Mitchell Vincent Pritchett is Jay's son and Claire's younger brother. He and Cam have adopted a Vietnamese young girl named Lily. He is a high-strung person. He received an undergraduate degree from Cornell and a law degree from Columbia University. As of "The Wedding (Part 2)", he is married to Cameron.

At most times he is the exact opposite of Cam which usually causes disagreements. Cam acts as a counterbalance to Mitchell. He appears to suffer from ornithophobia, which is the fear of birds. 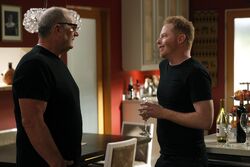 Mitchell has baggage with his father. Jay was a tough father growing up and took a while to accept that his son was gay (even though it was obvious in childhood). This has led Mitchell to very much want to appeal to his father, however it doesn't take long for one to disappoint the other. Jay has recognized his mistakes with his son and has tried to reflect better understanding with his stepson, Manny. Despite Mitchell's complaints, he learned patience in dealing with his father and strength in acceptance (though it is often forgotten).

Claire is Mitchell's older sister, whom he is close to. Though they had different social standings growing up, Claire enjoys how much she has in common with her brother. They share similar hobbies, such as exercise, craft-making, figure-skating and persnickety habits with high standards for their families and themselves.

In "En Garde", it is revealed that Claire and Mitchell formed and ice-skating team when they were younger, but right before the regional finals, Claire decided she didn't want to skate anymore. It was Mitchell's one time to impress his father and Claire bailed on him. Mitchell confronts her about ice skating. Claire says that she had got bigger and Mitchell couldn't lift her anymore. He dropped her a lot in practice. She apologizes, and they hug. Later, Mitchell confesses that he always hated ice skating but still participated because, while it was going on, they didn't hate each other as brother and sister, and Mitchell has missed that. Hearing this, Claire starts making her ice-skating poses and they end ice-dancing together

In "Strangers on a Treadmill", Claire enlists Mitchell's help to tell Phil that his jokes for the the SCARB (Southern California Annual Realtors Banquet) are unfunny, but ends in a disaster and the two finish arguing.

In "Aunt Mommy", during a dinner with Phil, Mitchell, and Cameron, Claire offers her egg to Mitchell and Cameron so they can have a half-Pritchett and half-Tucker baby. But the two couples are really regretting it in the morning and try to tell each other that they changed their minds. Mitchell and Claire finally decide to definitely to not do it even though they love each other very much.

Lily is Mitchell's adopted daughter. He loves her with all his heart but is often distracted by work. 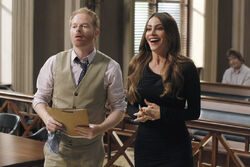 In "Moon Landing", Jay asks Mitchell for legal advice for Gloria who has been involved in a car crash. While Mitchell thinks that it is not Gloria's fault, Manny informs him that it was his mom's fault since she is a terrible driver. Mitchell tries to bring up the possibility that it was her fault but Gloria gets mad accusing him of being stereotypical. She leaves saying that she does not need him as a lawyer anymore. A little bit later, she comes back to apologize and to ask for Mitchell's help again for a second car crash. This time she crashed into a restaurant while she was attempting to leave.

In "Express Christmas", Gloria realizes that Mitchell and Claire miss their mother and she gives them a hug to comfort them.

In "Goodnight Gracie", while they are in Florida to attend Phil's mother funeral, he agrees to represent her in court as she was arrested in Florida because after moving and subletting her room in a house there, her roommate turned their apartment into a brothel. 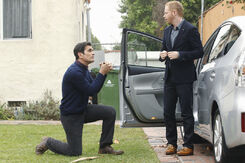 Phil is Mitchell's brother-in-law. They don't spend much time together, but they treat each other like brothers.

In "Strangers on a Treadmill", Mitch tries to tell Phil that his jokes for the the SCARB (Southern California Annual Realtors Banquet) are unfunny, but Mitch can't go through it after seeing Phil's sad face.

In "Tableau Vivant", Phil has to find a way to tell Mitch, that he is fired from his part-time job at the real estate agency. When Phil goes to Mitch's house to tell him about his dismissal while Mitch also tries to tell him that he does not want to continue working at the estate agency. Mitch bails out and he does not say anything and Phil believes that Mitch understood what he was trying to tell him. When Mitch appears at the agency later, Phil no having other choice, he finally tells him. Mitch is stuck in the elevator for two hours knowing he has been fired. The idea of losing his job does not seem to thrill him since he has never been fired before in his life.

In "Diamond in the Rough", Claire and Cam want to try their hand at flipping a house while they're at it, and Phil and Mitchell fight over who will be the bad guy to tell them no. Claire and Cam finally find out what they were trying to do, and get really mad at their significant others.

In "Goodnight Gracie", Phil's mother Grace died and Mitchell went to Florida with the rest of the family for the funeral. When they arrived, Mitchell told Phil he's sorry and hugged him.

Alex is Mitchell's niece. They don't spend much time together but there are some episodes in which they are seen interacting. 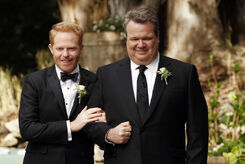 Cameron has been Mitchell's boyfriend for almost nine years. The two men are opposites in personality because of their contrasting upbringings. Cameron grew up on a farm, was very good in athletics, had a supportive family and isn't afraid to be flamboyant which contrasts greatly with Mitchell's conservative, contemporary childhood. This has worked well (and challenged) them over the years because Mitchell's good sense levels out Cameron's theatrical whims and Cameron's assertiveness has helped when Mitchell shows meekness. A good example of Cameron being a strange but great boyfriend is in "Fizbo"; Cameron is a professionally trained clown, which bothers Mitchell, but even in costume Cam is effectively protective when Mitchell gets in a tiff with a rude man at a gas station. Cameron is often concerned with Mitchell's bad habits, such as hiding affection in public, overthinking or becoming over competitive, or holding onto baggage from his parents.

In "Suddenly, Last Summer", gay marriage is approved in the state of California so the couple consider how the other would propose to one another (to family members--not with each other). Both come up with romantic and silly structures, though on their way to their joined surprises they get a flat tire. In doing the mundane task they sincerely reminisce on their relationship, both get on one knee and mutually agree to marry the other.

In "The Wedding (Part 2)", after a lot of misdeeds, they officially get married.

Retrieved from "https://modernfamily.fandom.com/wiki/Mitchell_Pritchett?oldid=24045"
Community content is available under CC-BY-SA unless otherwise noted.